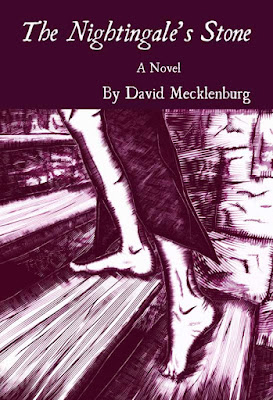 A fictional memoir, The Nightingale's Stone begins upon an evening in the Harz Mountains. A scribner and notary, having crossed the frontier of middle age searches for an old lover and answers. Instead she finds rather a hungry troll. In order to avoid becoming his dinner, she employs one of the oldest narrative tricks and tells him how and why she came there.

13 years earlier, she left her position as a lonely notary for a mining company in the carriage of a handsome man who said all the right things. You know the type. As they traveled across Northern Germany, she discovered magical talents, sensuality, and even compassion from a hideously mutilated indigo maker. Although her journey ended in betrayal and lies, she discovered more important things: her own strength and character through the meaning of her disillusions. But was it enough to sate the appetite of the Troll until the sun came up?

The Nightingale's Stone has now been republished by Blue Forge Press. Newcomers to this site may have missed their first chance at reading the book, but now it's here again.


"This novel represents the first "big" appearance of Ada Ludenow. I was somewhat concerned that things had changed drastically with regard to her outlook, timbre and subject matter, but no… if you've read any of the other Ada's World fiction, the voice remains the same, whether it is in a fictional 17th Century Germany or walking up Pine street in Seattle, WA. So this book remains an excellent way into Ada's World.

For a hybrid twist on memoir and speculative fiction featuring the novel debut of the one and only Ada Ludenow, a bit of personal discovery liberally seasoned with magic and existentialism, well, look no further.

Many of you are already familiar with it and for your support I am still very grateful, but if you haven't checked it out yet, now's your chance.